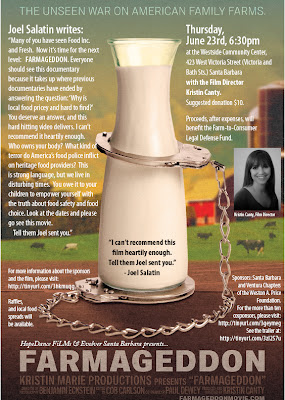 
Suggested Donation is $10
Includes Raffle for 'Who's Your Farmer?' T-shirt


The Santa Barbara and Ventura Chapter of the Weston A. Price Foundation with HopeDance FiLMs is proud to host Farmageddon followed by a question and answer session with the director Kristin Canty.


Farmageddon is a documentary about the escalating fight for food rights in America.  It's about raw milk, farm families harmed by the overreach of government, food safety legislation, and consumer food rights.  It is also the story of a mom whose son healed from all allergies and asthma after consuming raw milk and real food from farms. It depicts people all over the country who formed food co-ops and private clubs to get these foods, and how they were raided by state and local governments.


Farmageddon is anticipated to awaken consumers much as did "Food Inc", which was released in 2009. The 90 minute documentary includes Farm-to-Consumer Legal Defense Fund Board Members - Sally Fallon Morell, Gary Cox. Esq, Pete Kennedy, Esq., Judith McGeary, Esq., Tim Wightman, members Joel Salatin, Mark McAfee and raided farm families including the Stowers of Manna Storehouse, Mark and Maryanne Nolt of Nature's Sunlight Farm,  the Smiths of Meadowsweet, the Faillaces of Vermont and many others.


The Farm-to-Consumer Legal Defense Fund was started up by the Weston A. Price Foundation and has attorneys staffing the emergency hot line often receive calls from farmers during raids, and advise them of their rights during the raids.


No RSVP is required, but to better prepare to accomodate everyone, email wapfsantabarbara@gmail.com so we can ensure enough space.

Dr. Price wrote 'Physical and Nutritional Degeneration' documenting the importance of eating traditional foods and the diets of our ancestors he visited around the world. He said before he died in 1948 that 'You teach, you teach, you teach!'

Sally Fallon Morrell is a journalist, chef, nutrition researcher, homemaker, community activist and President of the Weston A. Price Foundation. She is the author of "Nourishing Traditions: The Cookbook that Challenges Politically Correct Nutrition and the Diet Dictocrats."

We follow the nutritional recommendations outlined in this book. It's our "nutrition bible!"

The companion book to Nourishing Traditions. Dr. Cowan merges the wisdom of traditional societies, the most modern findings of western medicine and the esoteric teachings of the ancients as he answers this important question: "How do we obtain true health?"

"We had the good sense to provide startup funds for the FTCLDF...it signaled to authorities everywhere, that we weren't backing down. We were leveling the playing field." - Sally Fallon Morell, President of Weston A. Price Foundation